Simply put, this must be the best Twincation I’ve ever planned. Redemption hangs in the balance. I already have a target for the trip – Tasmania. Only one question remains… where is Tasmania, exactly?

I suppose I should explain. My identical twin sister and I live thousands of miles apart. This doesn’t stop us from emailing constantly, chatting on the phone (normally a ghastly social faux pas for millennials), or agreeing to watch terrible shows together and then gleefully complaining about them. Another part of our ritual is to take a yearly “Twincation.” The great honor and responsibility of planning this outing changes hands each year.

Let’s just say that, in hindsight, I probably shouldn’t have signed us up for that beginner’s parkour class for our Philadelphia trip two years ago. My sister ended the trip on crutches and eventually had to hobble her way into a surgeon’s office where she received a new ACL for her knee. Whoops.

Two years later, the Twincation planning is in my hands…once again inspired by one simple question that got brought up on a phone call a few months ago: “Where is Tasmania, anyway?”

Not to put too fine a point on it, but this must be the greatest Twincation of all time, or I may never be entrusted with planning it again. For help choosing a destination, I went to my friend, Peter.

Peter is from Australia. As an American, I was, naturally, utterly enthralled by his accent as he told me about this awesome and mysterious place called Tasmania, an island off the coast of Aussie.

According to Peter, Tasmania is filled with amazing food, excellent mountain biking trails, something called “the bush,” and kangaroos.

He had me at kangaroos.

There was just one itty bitty problem. I didn’t know where Tasmania was, or – you know – anything about it. Luckily, I’m a master Googler and have patient friends from Australia that will tell me all about “Tassie” in a delightful accent.

After a little research, I did figure out where Tasmania is and more. Here’s what I learned.

Where Is Tasmania? In the Southern Ocean

The first task in planning my Twincation was to answer the question – where is Tasmania? A quick Google Map search led me to my answer.

Tasmania is a small island that sits between the Australian mainland and New Zealand in the South Sea. If you squint, it looks like a little teardrop coming off the mainland. If you squint harder, you could almost imagine that it was a heart.

It turns out that Tasmania’s unique location plays a big role in just about everything that makes it special, from its finicky weather, to the fascinating animals that roam its national parks, and even its famous white wines. Its location has also impacted its history. 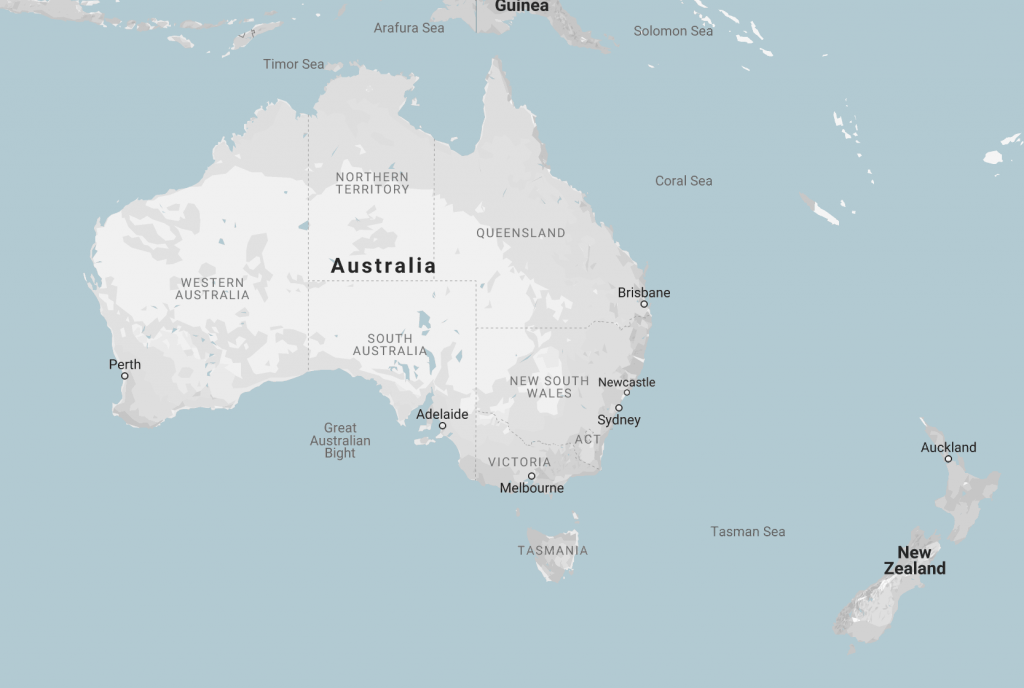 A Quick Bit of Tasmanian History

I love to learn about the history of the places I visit. This isn’t just so I can annoy my sister by snobbishly dropping historical facts during our trip (though that’s certainly a bonus). I genuinely enjoy understanding how a place’s history affects its culture, people, and traditions.

Most historians believe that Tasmania was originally connected to the Australian mainland. Roughly 10,000 years ago, Tasmania probably decided that it needed to go “find itself” and broke away. For thousands and thousands of years it existed in near isolation, which allowed its wildlife, plant life, and Aboriginal people to develop in unique ways.

Then, as happened to so many places, Europeans also asked themselves “where is Tasmania (though it wasn’t yet called that for hundreds of year – you get the point)?” This started when the Dutch explorer Abel Tasman swung by for a visit in 1642. A few decades later, the British established a toehold in what they called “Van Diemen’s Land,” and built their second Australian colony at Hobart.

The British beheld all the natural wonder of Tasmania… and decided to ship a few prisoners over. (You can still see a wonderfully preserved convict site at Port Arthur.) Relations with the natives also soured and led to calamity for the Aboriginals.

Eventually, however, things got better. In a symbolic break with the past, Van Diemen’s Land was changed to Tasmania in 1856.

In 1901, all six colonies of Australia joined together to form the “Commonwealth of Australia.”

Since then, Tasmania has been doing a lot of good things, including turning 45% of its land into protected national parks. As a result, Tasmania has some of the most beautiful and diverse scenery in the entire world.

The Natural Wonders of Tasmania

My friend Peter and his gorgeous accent were right. After doing my research, I can definitively say that Tasmania sounds like an incredibly awesome place to visit, especially if you love the outdoors. It is famous for great mountain biking trails, beautiful national parks, craggy coastlines, and fascinating bush.

Tasmania made the most of its thousands of years of isolation, nurturing a wide and diverse bounty of animals and vegetation. At the top of the wildlife list sits the Tasmanian Devil, which is only found in Tasmania. These little guys are the world’s largest carnivorous marsupial and are famous for their growls, screeches, and snarls. Sadly, the Tasmanian Devil population is struggling with the spread of a nasty disease called devil fascial tumour disease (DFTD). The Tasmanian government is on the case and has developed several programs to protect the island’s namesake mascot.

Other fascinating creatures and critters that can be found in Tasmania include the wombat, pademelon, platypus, kangaroo, wallaby, wombat, echidna, bandicoot, and potoroos.

Before you ask, yes, these are all real animals. Also, yes, you absolutely should head over to Google Images immediately to look up every single one of them.

Another cool feature of Tasmania is its plant life. Though the island is only 26,140 square miles (68,401 square kilometers), making it roughly the size of West Virginia or Ireland, it possesses a hugely diverse biosphere. Personally, I’m going to be on the lookout for the Huon Pine, which is one of the longest living plants on earth. This tree can live up to 3,000 years!

That means some of the trees in Tasmania may have existed when Aristotle, Alexander the Great, and Cleopatra were making their marks and way way longer than it was even possible to ask, “where is Tasmania” – not many people even knew it existed!

Other plants to search for are the Deciduous Beech, the only deciduous tree in Australia, and the Pandani. The Pandani is the largest heath plant in the world, and it only lives on Tasmania. You’ll never see its kind again when you leave the island.

If you do decide to wander the bush or visit any of the island’s 19 national parks searching for the elusive echidnas (I swear it’s a real thing), make sure you bring plenty of layers. Tasmania (and Australia)’s fickle weather is a thing of legend, but seeing a place like Freycinet National Park with your own eyes is well worth the gamble.

Tasmania Weather Includes All Four Seasons – and Then Some

While Tasmania is located physically close to the Aussie mainland, in many ways it feels like a different world. Mainland Australia is famous for its furnace-like summers, while Tassie offers visitors a temperate climate and all four seasons.

A lot of Tassie’s weather patterns have to do with the island’s many mountains and hills. They’re also responsible for the frequent rainfall, which can make your day a little soggy but also results in gorgeous, verdant landscapes.

As a resident of the Southern Hemisphere, Tasmania and Australia’s weather is inverted from ours. The summer months take place between December and February. In December, while I’m shivering in the United States, Tasmania is warm and bright. Summer is also the island’s driest month, making it one of the best times to visit Tasmania.

After reading lots of travel blogs on Tassie, I know I need to pack smart. Tasmania’s weather is, shall we say, a bit devilish. Apparently, temps can drop out of nowhere, and rain likes to sneak up on unsuspecting visitors who didn’t think to bring an umbrella or poncho.

Not only is a temperate climate ideal for outdoor adventures, but it grants another bounty to Tassie – vino! Tasmania’s chillier temps mean that it can grow cool-weather grapes and turn them into delicious pinot noir, chardonnay, and sauvignon blanc.

As a bit of a wine snob, I’m looking forward to a little glass swirling and sipping during our time down under. (Tassie also gets props for its excellent craft beer, which my hops-happy sister will appreciate – bonus points for moi.)

Tasmania Is in My Soul

A few days ago, I couldn’t answer that question. Now, Tasmania is firmly planted in my soul. It’s also on my brain. The gears are turning, and the Twincation plans have begun. Our Tassie Twincation is going to be so great my sister will forget all about that pesky ACL surgery.

Well, I can dream.

As I begin to plan the one Twincation to rule them all, I’ve started to live on Tasmania.com. This site has all the Tasmanian restaurants, accommodations, adventures, and tour packages any traveler could wish for.

Now that you know where Tasmania is, it’s time to start planning your own adventure today! Maybe we can compare notes. 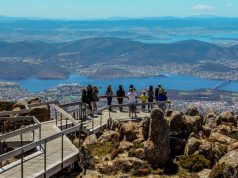 Things to Do in Tasmania: Family Road Trip 5 Tasmania Tours to Add to Your Traveling Bucket List A locals perspective on travel in Tasmania

Things to Do in Tasmania: Family Road Trip

How to steal a wooden boat and dodge the noose

Where to find a Tasmanian Devil