The Ben Lomond National Park is invaluable for the conservation of the flora communities and species...
Image thanks to: Tourism Tasmania & Glenn Gibson

Pepper Bush Adventures operating since 1997 and based in north east Tasmania provides private Tasman...
Image thanks to: Tourism Tasmania and Rob Burnett

Visible across most of the northern coast, Ben Lomond National Park consists of a massive mountain which is surrounded by a plateau. Sitting in northeastern Tasmania, the protected mountain is pivotal in the conservation of many animal species including the pademelon, Bennetts wallaby, forest kangaroo and wombat. All of these lovely little critters can usually be seen in the National Park's village during all seasons, even during a blistering blizzard.

The high elevation ensures powder snow in the winter months, so Ben Lomond offers up Tasmania's premier skiing facilities. And the thundering dolerite features of columns and steep screes are a delight during all seasons. The mountain and its plateau can be ascended on one of many walking tracks or by driving up a windy road known as Jacob's Ladder.

The plateau surrounding the mountain is 14 kilometres long and six kilometres wide. With its elevation, the plateau is home to different fauna than the rest of the Tasmanian island with the alpine wildflowers being especially spectacular during the summer months.

Snow activities are most popular in the park. During the winter months, the park's alpine village is home to those seeking to ski, sledge and snowboard. But the park is beautiful for a drive or a nature walk all year-round.

Jacob's Ladder, the park's zigzag road that takes you to the top of the park, is a delightful way to drink in the scenery. You achieve dizzying heights during the drive which allows you to see for miles in every direction. The steep dolerite screes and columns are breathtaking while the unique vegetation will make you think you've left Tasmania altogether. It's especially wonderful during summer when the alpine wildflowers bloom across the treeless landscape.

Ben Lomond serves as training grounds to competitive cyclists, the most famous of which is Richie Porter. The steep zig zag of Jacob's Ladder makes for a breathtaking ride; literally. The challenging elevation and steep grade make for fantastic training.

Hiking is a longstanding tradition in the park with the first walking tracks being established by aboriginal populations. Modern tracks to the plateau were cut in the 1830s and you can take advantage of these challenging tracks today. Walking tracks can take you up to the plateau for exploration or you can challenge yourself to one of two summits. The northern summit is Legges Tor standing at 1,572 metres, and the southern summit is Stacks Bluff at 1,527 metres.

The plateau features a massive dolerite mountain that contains many offshoot peaks with two prominent summits -- the 1,572-metre Legges Tor in the north and the 1,527-metre Stacks Bluff in the south. Dolerite, a rock only found in Australia, provides for thundering columns and steep screes across the treeless landscape. And the plateau is surrounded by the Launceston's South Esk River on three sides.

The elevation of the park ensures that it will be cool in the summer and cold in the winter. Temperatures dip below freezing at night in the winters to provide the mountain and its ski fields with abundant snows. And the peak attracts clouds and precipitation. Always pack warm clothes that are good in rain and snow.

You'll find wombats wandering the park's village at dusk as well as Bennetts wallabies. Forest kangaroos and pademelons can be seen in the wet gullies. Eastern quolls make the park's village their home in the winter months while dusky antechinus has been known to visit lodges. The rare platypus has been spotted in the Upper Ford River along with the echidna.

Wedge-tailed eagles have been spotted on the peaks while black-tailed cockatoos are seen in the village. A long list of endemic Tasmanian bird species can be spotted, as well, including the green rosella, yellow-throated honeyeater, scrub it, brown thornbill, yellow wattlebird, black-headed honeyeater, the black currawong and the strong-billed honeyeater.

You can find plentiful facilities in the park's village, but there is only one accessible campground. You'll find six sites with no power designed for tents or campervans. You'll also find flush toilets, drinking water and a lookout at the campsite with a shelter for emergency protection against precipitation. Intrepid hikers will also find rugged campsites with no facilities just below the park's two summits.

The Ben Lomond Nation, an aboriginal population consisting of three clans with 150 to 200 people, originally inhabited the area. These clans hunted in the nearby Esk Rivers and traces of their existence can still be seen today near the two peaks within the park. Initial encounters with settler took place in the early 1800s when convict hunters would peaceably trade kangaroos and hunting dogs. But land grants to wealthy settlers began an era of violence as convict hunters were displaced from the area. Aboriginal women and children were treated particularly harsh as abduction raids were carried out in the area. Abductions, raids, murders and disease eventually drove the aboriginal people out of their native lands and was capped off by Colonial Governor George Arthur's place to remove aborigines from Tasmania altogether. What was left of the Ben Lomond people were forced to assimilate into European culture, and the people dissolved as a political and cultural identity soon after.

The first European to summit Ben Lomond took a party of soldiers up the plateau in an attempt to locate and eradicate aboriginals in 1829. In 1833, the world-famous Tasmanian landscape artist John Glover ascended the peaks to make sketches and paintings of the outlying lands. But it wasn't until 1841 that the park was officially surveyed.

In the mid-1800s, the park was temporarily exploited for minerals including coal and gold, but the exploration was not fruitful. Walking tracks were carved into the mountains for recreation and rudimentary huts were built for hikers. It wasn't until 1947 that the area would be declared a national park. Now Tasmanians flock to Ben Lomond to enjoy the views and the ski fields. 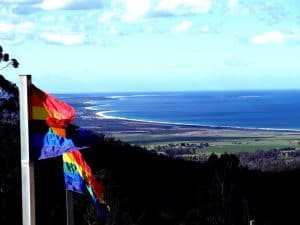