Telopea truncata - Commonly known as the Tasmanian waratah blooms is an evergreen shrub native to Tasmania.

Trek on up to the northwest of Tasmania past where the road ends and you’ll arrive at the Savage River National Park. This massive conservation area is the largest cool temperate rainforest surviving on the Australian continent. You’ll need a four-wheel-drive vehicle to access this incredibly rugged wilderness and its geo-diversity as there is no mechanized access or facilities. The pristine Savage River pours through a gorge covered in thick rainforest. If you have the courage and stamina to access this wild terrain, you’ll be rewarded with rugged solitude and untarnished natural surroundings.

This untouched stretch of land sits inside the Savage River Forest Reserve. The reserve surrounding the national park contains a few rugged four-wheel-drive tracks that can get you close. Other forest reserves in the area have mechanized access so you can d rive near the National Park and trek your self in. Otherwise, this park is more than 100 kilometers from Devonport and the journey that takes you close to the park should take you almost 2 hours. The drive from Launceston should be more than 3 hours and Hobart sits more than 5 hours away. Image Credit: Tourism Tasmania & Rob Burnett

The Savage River National Park covers 180 km². Hikers courageous enough to enter the park must pack accordingly and be aware of Tasmania’s fickle weather. Primitive bushwalking into this national park comes at a risk as there are no visitor facilities within this massive swath of land. And without mechanized access to the park, rescue operations must be performed on foot. There are no visitor facilities in the Savage River National Park. If you are an intrepid hiker, you can take a four-wheel-drive vehicle into the surrounding reserve and carve your own path into the park. There you’ll find stunning geo-diversity, rushing river catchments, primitive flora and fauna, the most extensive basalt plateau in the country, undisturbed ecosystems, old forests and breathtaking wilderness.

It’s best to stay on the outskirts of the national park by visiting a number of forest reserves to the north and west to get a feel for what it is like inside the national park itself. The Julius River Forest Reserve and Milkshakes Hills Forest Reserve are similar to Savage River National Park and have visitor facilities and mechanized access. You’ll be much safer in these areas while being able to experience similar ecosystems and terrains. You can also find plenty of nature walks in the surrounding Savage River Regional Reserve as well as fishing, camping, off-road driving tracks, rafting, kayaking and canoeing opportunities. Image Credit: Tourism Tasmania and Rob Burnett

Savage River National Park contains the largest untouched cool temperate rainforest in Australia. In the Western corner of the park, you’ll find an incredibly extensive basalt plateau while the Savage River itself pours through a gorge covered in thick rainforest.

The weather in the park remains cool throughout the year and temperatures can get pretty low when the sun sets. Couple cool temperatures with unpredictable rainy weather, and you have a recipe for dangerous conditions in unreachable lands. 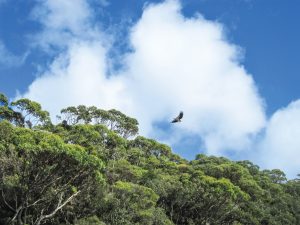 There are no camping sites or facilities in the park.

This park was not established until 1999. This particular stretch of land is so beautiful that it is barred from human settlement and Tasmania has gone out of its way to prevent mechanized access to the Savage River Area. It was set aside to protect its incredible biodiversity in an intact rainforest ecosystem.