Cape Bruny Lighthouse at the southern tip of Bruny Island, Tasmania, is the second oldest extant lighthouse tower in Australia, as well as having the longest (158 years) history of being continuously manned.
Image thanks to: Tourism Tasmania & Adrian Cook

The Friars are four steep dolerite rocks, with a combined area of about 17 ha (42 acres). They are p...
Image thanks to: Tourism Tasmania & Filip Kulisev

The southern edge of Bruny Island is a towering wall of sea cliffs capped by lush rainforest. This incredibly popular area provides shelter to many of Tasmania's endangered plants and animals. South Bruny National Park is a birdwatcher's paradise and is home to one-third of the world's Swift Parrot population. And the waters are full of life with tiny blue penguins roosting on the shores and migratory Right Wales swimming in the depths.

This protected area is also home to many historic sites. Evidence of the ancient Nuenonne Aboriginal inhabitation of Lunnawannalonna (Bruny Island) can be found in the form of quarries, artefacts and stone arrangements along the coastline. You'll also find Australia's second oldest lighthouse, Cape Bruny Lighthouse, at the southern edge of the park. Constructed back in the 1800's, this lighthouse remained a beacon for more than 150 years, making it the longest continuously operated lighthouse in Australia.

You'll have to take a vehicular ferry from Kettering to reach the northern point of Bruny Island. The boat trip takes around 15 minutes. You'll then drive to the southern end of the island to complete the journey. The park sits about 90 kilometres south of Hobart and the entire journey takes about 2 hours. Launceston is about 4.5 hours to the north while Devonport sits more than 5 hours away.

Swimming at the foot of this National Park's incredible sea cliffs is a wonderful way to spend an afternoon. Safe swimming areas can be found at Adventure Bay and Jetty Beach. These areas are sheltered from the violent surf of the ocean.

But that violent surf is exactly why some make the journey. Cloudy Bay offers up towering waves to adventurous surfers who flock to this location from all over the world. And while the surfing here is exhilarating, it should only be reserved for experienced surfers.

The Cape Bruny Lighthouse is the country's second oldest lighthouse. Built in the 1830's after a number of shipwrecks in the area, it remained continuously staffed for more than a century. In fact, this historical site is Australia's longest continually staffed lighthouse. The 13-metre dolerite tower can be found at the end of Lighthouse Road.

Find the ruins of two 19th century whaling stations at Cloudy Bay and Grass Point. Migratory whales in the area made for good whaling in the 1800's before the entire industry became unsustainable. The exploitation of these majestic creatures collapsed the whaling industry in the late 1840's.

The Southern Right Whale migrates past this national park between the months of June and October. These majestic creatures can be seen from the sea cliffs along with other interesting ocean creatures. The world's smallest penguins, otherwise known as blue penguins and fairy penguins, make South Bruny National Park their home. These tiny flightless birds go out into the water during the day to hunt before returning at dusk and formations called rafts. You can also see fur seals playing in the water around The Friars.

There is a variety of nature walks throughout the park that can take you through the rainforest, over grass fields, to secluded beaches and to historic ruins. The popular Grass Point is a gentle track safe for the entire family that takes you to the ruins of a whaling station. The challenging Labillardiere Peninsula Circuit takes you to mount Bleak where you'll have incredible views of Partridge Island.

The park is mostly comprised of towering dolerite cliffs. Dolerite is a rock only found on the Australian continent and is responsible for the stunning geographical formations found in the park. But the park's borders can also recede from the coastline to incorporate cool temperate rainforests full of interesting land creatures like the Echidna, Bennett's Wallaby, possum and Pademelon.

The southern reaches of this massive island experiences incredibly controlled temperatures. The average high in the summer is only 20°C and the average low in the winter is only 6°C. You can expect pleasant temperatures during your visit no matter what time of year, but always plan for unpredictable weather with wind and rain.

Birdwatchers flock to Bruny Island to catch a glimpse of 13 out of 14 endemic Tasmanian bird species. This national park is also home to many rare birds like the hooded plover and the Swift Parrot. One of the largest colonies of the endangered forty-spotted pardalote lives on Partridge Island within the park. You'll also be able to see thousands of mutton birds, otherwise known as Short-tailed Shearwaters.

The rainforests, eucalypt forests, coastal scrub and heathlands are also home to plenty of marsupials. Most of the land creatures inside the park are nocturnal so you'll have a difficult time seeing them during the day. Your best bet for catching a glimpse of a wallaby, possum or Pademelon is at dusk. The only notable land creature that is not nocturnal is the Short-beaked Echidna.

You can find camping at Jetty Beach, the Bruny Island Game Reserve and at Cloudy Bay. This is an incredibly popular tourist attraction so the surrounding towns on the island cater to throngs of visitors with plenty of accommodations that can suit all budgets. You'll even find a caravan park at Adventure Bay. Drive your campervan onto the Bruny Island vehicular ferry at Kettering and you're good to go.

Abel Tasman was the first European to lay eyes on this area in 1642. But safe anchorage in Adventure Bay was not made until 1773 by Captain Tobias Furneaux. The intrepid captain named the bay after his own boat dubbed The Adventure. Captain James Cook then used the Bay in 1777, and in 1792, French Admiral Bruni D'Entrecasteaux anchored in the bay and named both the island and its channel after himself.

The park then became used as an important whaling station. Southern Right Whales were harvested as they migrated during the winter months, but the whaling became unsustainable by the 1840's. The industry collapsed and remains of two whaling stations can be seen in the park at Cloudy Bay and at Grass Point. 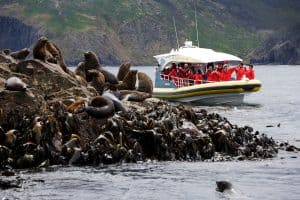