A wooden, white-and-yellow painted rowboat on an empty white sand beach in north-eastern Tasmania, A...
Image thanks to: photosbyash

The boundaries of this north coast national park are quite clear. From The Nut, a volcanic plug rising almost 200 meters of the ocean on a small sliver of land at Stanley, to Table Cape, an even larger coastal volcanic plug just north of Wynyard, Rocky Cape National Park offers sweeping coastal views on the Bass Strait.

Many make the journey on the Bass Highway that cuts right by this coastal national park. A stop at the national park is well worth it as it features sea caves, isolated beaches and undisturbed rock pools. And you'll be able to see plenty of beautiful flowers and vegetation on your way to Rocky Cape National Park, as carefully manicured gardens lay between the highway and the train tracks. Rocky Cape National Park lives on the coast between Stanley and Wynyard. The heart of the park is about 88 kilometers north of Devonport and the drive on the Bass Highway should take you a little more than an hour. But the drive to this park is part of its appeal, as the highway cuts through picturesque coastal towns.

At just under 31 km², Rocky Cape National Park is rather diminutive. After all, the big attraction is the rocky coastline of northern Tasmania. The park does not reach very far inland. But for what it lacks in size it makes up for with tremendous coastal views. Flower lovers flock to Rocky Cape National Park in the spring and summer to experience incredible blooms. All of the plants along the coast here in Tasmania's north are hardened to the salt and have become accustomed to the winds of the Roaring Forties. These hearty plants bloom spectacularly with bursts of colors when temperatures rise. The Xanthorrhoea dots this national Park. This impressive plant has a massive skirt made of grass and a tall spiky flower reaching to the sky.

You'll find many significant Tasmanian Aboriginal sites along Rocky Cape National Park. Artifacts, rock shelters and caves show the deep spiritual connection these original Tasmanian's had with this rugged land. The Aboriginal community still takes care of these sites today for your enjoyment.

There are plenty of scenic coastal walks throughout the park. These flat walking tracks take you along the Bass Strait to white sandy beaches, hidden caves and over flower-covered hillsides.

Make sure to carefully descend the rocky coast to inspect any placid rock pools you may come across. You'll find colourful seaweed and starfish that make a spectacular visual mosaic.

The soft sandy beaches call to ocean lovers. There is plenty of swimming to be done as well as fishing and boating. And once you've gone out on the Bass Strait, bring your fresh catch back to the many barbecues and picnic areas in this stunning national park. You'll find gas barbecues at Mary And Cove and electric barbecues at The Sisters Beach Holiday Area.

Take a big, deep breath when you're on the windy coastline and you'll feel plenty of energy. That's because the Roaring Forties are bringing you the freshest air on planet earth. The Roaring Forties is the weather system that churns through the entire Southern Hemisphere. 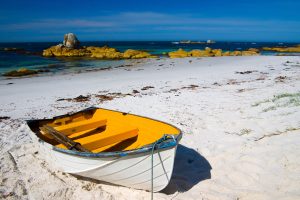 The Rocky Cape National Park tells you its geological features in its name. This small park is mainly made up of coastal heathlands and rolling hills covered in flowers. Everything you see in the park is used to the salty spray of the ocean and the power of the winds.

The north coast of Tasmania is where you'll find the world's smallest Penguins. These tiny creatures go out to hunt in the Bass Strait during the day and come back to their beachside homes at dusk. These cute little birds come back in formations called rafts and it is adorable to watch them fight the small surf to get back onto terra firma. Stay quiet and you can watch them waddle to their sandy subterranean homes.

Rocky Cape National Park is a day use area. There are no camping facilities within the park. But you'll find plenty of picnic areas, barbecue areas and toilet facilities at Mary And Cove and The Sisters Beach Holiday Area. There is no drinking water available at either facility.

Rocky Cape National Park is full of living history. The Aboriginal sites can be carbon dated back to 8,000 years ago. Many of the parks coastal walks will take you to the sites where you can see how the earliest Tasmanians lived and survived.