The Mole Creek Karst National Park includes some of Tasmania's most visited cave systems, including Marakoopa and King Solomons Cave, two of over 300 known caves and sinkholes in the area. Marakoopa Cave features two underground streams, a large display of glow-worms, large caverns and rim pools. 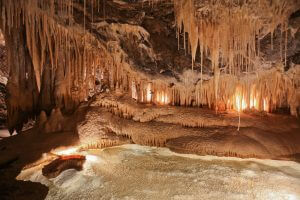 The drive into this national park is as nearly as impressive as its subterranean wonders. You’ll drive through an unbelievable Karst landscape that was built millions of years ago before Tasmania broke off the supercontinent Gondwana. This park contains more than 300 known caves and sinkholes, and new caves are still being discovered. Marakoopa and King Solomon’s Caves feature easy access, informational displays and a peek into this one-of-a-kind world.

Mole Creek National Park sits just north of many other Tasmanian national parks in the central part of the island. You’ll find it on the northern edge of Cradle Mountain-Lake St. Clair National Park, The Walls of Jerusalem National Park and the Central Plateau Conservation Area.

Devonport is the nearest city, sitting a little more than an hour to the north, while Launceston is a similar distance away to the east. Hobart is 3.5 hours to the south. You’ll access the national park via B12 through the town of Mole Creek. There are well-posted signs with the first leading to Marakoopa Cave and the second leading to King Solomon’s Cave.

This national park is rather diminutive in size. At just 13 km², Mole Creek National Park is one of the smallest conservation areas in Tasmania. But the park’s caves descend deep into the earth and there are more than 300 of them. Essentially, the explorable caves of this park make it one of the largest in all of Australia.

Mole Creek National Park is all about cave visits. You can take guided tours into the 2 most accessible caves — Marakoopa and King Solomon’s — or you can just tour the caves yourself.

Marakoopa Cave features two stunning guided towards. The Underground Rivers and Glow Worms tour take visitors to the lower chamber of the cave past reflective pools, shimmering crystals and stalactites. You’ll descend to a breathtaking display of glowworm’s while you take in the relaxing sounds of the cave’s subterranean streams.

You’ll need a medium fitness level to take Marakoopa Cave’s Cathedral, Gardens and Glow Worms tour. This guided tour takes you down to a massive Cathedral cavern covered in beautiful subterranean colours. You’ll marvel at the delicate geological formations throughout.

King Solomon’s Cave is known for its intricate stalactites, stalagmites and shawls. The guided tour through this cave does not take you by any glow worms or streams, but it does bring you to some of the park’s most stunning geological features.

The entire National Park is a Karst landscape that is millions of years old. Erosion of the karst limestone has opened up more than 300 caves and sinkholes in the area and has given way to some of the parks most intriguing underground features. The stalactites, stalagmites and columns are all formed by erosion as well as the giant Cathedral caverns. The Karst landscape can be toured above ground as well. Short walking trails bring you through the sneaky forest that hides this underground metropolis.

You may be lucky to catch a glimpse of a few Troglobites in Marakoopa Cave. The streams that crisscross through the cave bring in plant materials and insects for these cave dwellers to feast on. Fun fact – A Troglobite is a word for any creature that lives its life completely in the dark and has no eyes!

But the big draw of Marakoopa Cave is the glow worms. This particular cave boasts the largest display of glowworms in all of Australia. These iridescent creatures hang from the ceiling to give off a sparkling blue light. It can feel like you’re under a giant sky full of stars when exploring this cave. But glowworm’s are not worms at all. Instead, the glowing that you see is made by a larva of a mosquito-sized fly. Reproductive-aged females give off the light to attract their male partners in the dark.

You’ll have to head out to the town of Mole Creek or nearby Sheffield for accommodations, petrol and supplies. But while there is no camping inside the park, there are plenty of amenities.

Each cave has toilet facilities, running water and picnic pavilions. You’ll also be able to pick up some firewood and souvenirs at each cave. Each of the caves also features electric barbecues, but a public telephone is only located at King Solomon’s Cave.

Mole Creek National Park has a history almost as big as its Cathedral Caverns. These limestone caves began forming more than 500 million years ago when Tasmania was a part of a supercontinent known as Gondwana. The area of the park was under a shallow and warm ocean when limestone deposits, mainly from coral reefs, began to pile up.

The uplifting of the nearby Central Plateau and Tasmania’s break away from Antarctica began to form the caves. Glacial sediments and meltwater began to carve sinkholes and caves into the Mole Creek National Park about 30 million years ago. You can still see the remains of some of the sediments on the ceiling of Marakoopa Cave at the Coral Gardens.

Streams began to carve their way into the Karst landscape to form even more caves over the years. Marakoopa Cave is actively being deepened by erosion from its many streams. King Solomon’s Cave is dry, but its incredible depths were once carved by a now-dry stream.