In southeast central Tasmania, wild rivers cut deep gorges into protected lands. Much of the dramatic landscape was carved by ancient glaciers in this remote and rugged area. Towering Huon Pines dominate the landscape with many of them over 3,000 years old. And cool temperate rainforests, dry eucalypt forests and button grass moorland cover this breathtaking national park.

Driving through the park on the Lyell Highway is nearly as impressive as exploring the park on foot. The road spans 57 kilometers and cuts through the heart of Franklin-Gordon Wild Rivers National Park. You'll chase crystal-clear winding rivers over snowcapped mountain peaks, through lush rainforest, and over dramatic river valleys and deep gorges. Stop for a picnic and a short walk on the many pull-offs throughout the park.

Drive 2.5 hours west from Hobart on the Lyell Highway to enter this rugged Park. The King William Saddle serves as the informal entrance and marks the boundary of the park. You'll experience a remarkable change in flora and fauna as you enter western Tasmania. But always check the weather, as snow has been known to close down the Lyell Highway.

The drive from Launceston takes the same 2.5 hours, but you'll have to take the Lakes Highway. The drive from Devonport takes nearly 3 hours and can take you to the western edge of the park marked by Nelson Falls.

You can also take the boat into the Franklin-Gordon Wild Rivers National Park. The lower Gordon River is accessible on a daily cruise boat that ports at the coastal village of Strahan on the western side of the park. You can also arrange for a private scenic flight over the park from this small coastal town.

There are two lookouts within the park that should not be missed. Surprise Valley and King William Saddle give visitors incredible views of this rugged land. The Surprise Valley Lookout sits at the top of a U-shaped Valley that was carved by glaciers in the p ast ice age. There are no spurs in the Valley as the walls have been ground down by slowly moving ice. King William Saddle features views of King William Range, Mount Rufus and the Frenchman's Cap.

Unsurprisingly, nature walks are incredibly popular in this Park. Trailheads can be found along the Lyell Highway that carves through this rugged landscape. The walks range from easy strolls to weeklong adventures to the summit of Frenchman's Cap. The small coastal town of Strahan operates the West Coast Information and Booking Center where you can find detailed maps of this Tasmanian Wilderness World Heritage Area.

Nelson Falls sits about 4 kilometres to the west of Victoria Pass. There you'll find the Nelson River Bridge and the Nelson Falls Nature Trail. The walk lasts about 20 minutes and takes you through cool temperate rainforests to the roaring Nelson Falls which marks the western edge of the park.

The Donaghys Hill Wilderness Lookout Walk gives you panoramic views of the Franklin River Valley and the Frenchman's Cap. The 40-minute walk is on a well-marked trail where you can peer at the sparkling summit of Frenchman's Cap. The mountaintop remains sparkling throughout the year. It is covered in snow and ice in winter and sparkles due to exposed quartzite during summer.

You can arrange for riverboat and canoe trips throughout the park. They can last from an afternoon to an entire week. Many of the canoe trips take off from the Collingwood River which features a pleasant 5-minute walk to the junction of the Alma and Collingwood Rivers. You'll find basic campsites but no facilities at this junction. Image Credit: Pete Harmsen

The park is dominated by cool temperate rainforest. You'll also find a smattering of dry eucalypt forests and button grass moorland. But the most attractive natural feature of this part has to be the towering and ancient Huon Pine Forests with trees more than 3,000 years old.

The west of the park receives an unbelievable 2,500 mm of rain per year. This deluge of rainfall supports cool temperate rain forests. The east is drier and that's where you'll find the eucalypt forests and button grass moorlands. And, just as the name of the park suggests, wild rivers cut deep river valleys and gorges into this spectacular landscape.

This national park is known for its spectacular birds. Head out to the west coast town of Strahan to start your bird watching journey. There you'll find the Short-tailed Shearwater, otherwise known as the mutton bird. Between April and October, thousands of these birds return to their burrows at Ocean Beach.

On your way into the park on the Gordon River, you'll be able to see both types of eagles that call Tasmania home. The White-bellied Sea Eagle makes Strahan their home while Wedge-tailed Eagles can be found along the river. The Wedge-tailed Eagles are Australia's largest raptors (birds of prey) with a wingspan of 2.2 meters. They feed on small mammals throughout the park.

And while on the river be on the lookout for the Tasmanian Azure Kingfisher and Pink Robin. The Kingfisher features deep royal blue colours with a bright orange chest. They perch on branches over the river and feast on small fish, frogs, crayfish and insects. The Pink Robin makes the rainforest its home. You can find them perched up in the canopy giving out a soft, delicate song.

This national park is primarily a day use area. You can find some rugged campsites at the intersection of Collingwood River and Alma River, but there are no facilities. You can find accommodations in the nearby west coast town of Strahan. In fact, this town contains the West Coast Information and Booking Center which gives you all the information you need about the park, its trails and attractions. Highland Cabins and Cottages Bronte Park - Central Highlands
Find A Rate
Situated in the mountains, this hotel is 3.5 mi (5.7 km) from Bronte Lagoon and within 20 mi (32 km)…
View More 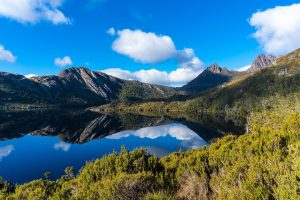