Glowworms await you inside Mystery Creek Cave at the end of this flat and well-marked trail. And it's an easy-earned reward as you'll marvel at relics of a bygone mining era along an abandoned train track. This walk is quintessentially Tasmanian. You'll literally walk through some of the island's 1800-era mining boom history to experience the Australian-endemic glowworm. And it's all easily accessible for the entire family. Plus, you'll be on the outskirts of the protected and wild Southwest National Park; one of the largest swaths of protected land on the planet.

Interestingly enough, the drive to the hike is nearly as beautiful as the hike itself. You'll take the Huon River Highway through one of the most verdant valleys on the planet. The Mystery Creek Cave hike is short so you'll have plenty of time to enjoy the lush rolling hills and orchards that have earned Tasmania the nickname 'Apple Isle' on your way through the valley. You may even want to stop for a pint of cider. Perhaps put some time aside to pick some of your own fruit and have a picnic.

After about 70 kilometres on the Huon Highway, you'll take the Lune River Road in Ida Bay. About a half-kilometre after the rail station, you'll take a right on South Lune Road. Drive another 4 kilometres to find the Mystery Creek Cave Trail on the left.

Tasmania experienced a mining boom in the 1800's. Prospectors from all over the world descended upon Tasmania to strike it rich. Some were successful but most were not, and some stripped the land of all its life in places like Queenstown. Fortunately, the mineral mined from the Mystery Creek Cave trail was limestone. The walk takes you along an abandoned tramway that transported the mineral from a large quarry about a kilometre into the forest.

The tramway can be quite muddy, even on dry days, so be sure to bring along sturdy shoes. The forest around the tramway is incredibly thick, which makes you wonder how they carved and laid the track in the first place. You'll find old timey tin cups, empty 1800-era bottles of whisky and tramway car wheels along the track; all relics of a bygone era.

After about a kilometre, you'll reach the limestone quarry. You'll descend into the forest along the left-hand side of the quarry to the cave. You'll find a sign warning you that the cave is prone to flash floods and it's good to keep in mind that weather in Tasmania is precocious and unpredictable. This is why it is only safe to explore the first section of the cave. You'll be able to marvel at plenty of limestone formations, and, if you're lucky, you'll spot a few glowworms shimmering on the ceiling. The blue twinkling starlights are actually the hanging larvae of a mosquito-like insect and not a worm at all. Although the sticky, hanging and glowing threads do seem like worms to the naked eye. After searching for the elusive glowworm, it is time to return down the same tramway track.

Weather can change abruptly and bring unpredicted, heavy rains. The cave is prone to flash flooding. Only explore the initial chamber and listen for rainfall outside.

The track is quite muddy so bring proper footwear. 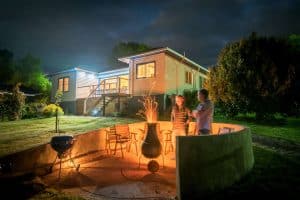 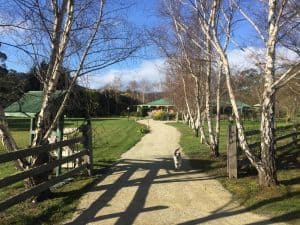 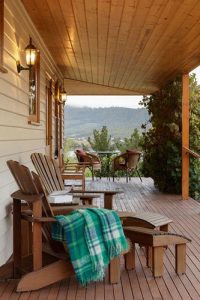