Tarkine Forest Adventures is an eco-tourism and forestry interpretation centre near Togari, northwes...
Image thanks to: Tourism Australia & Graham Freeman

Activities Accommodation Car Hire Map
Concierge Booking Our team is here to help you plan, quote and book extraordinary Tasmanian experiences.
Book Yourself
Eco Conservation
Tasmania is a living testament to nature conservation. The island state went through a mining boom back in the 1800’s and the scars can still be seen today. Take a drive to the west coast city of Queenstown to experience a moonscape created by copper smelting and excavation. The hills have been stripped of trees and topsoil while the exposed rock has been stained with a myriad of colours. It's a beautiful mosaic and a haunting reminder of Mother Earth's fragility.
The Roaring Forties weather system powers the entire Southern Hemisphere and Tasmania lay right in its path. Bringing fresh rains and the cleanest air on earth, the Roaring Forties downpours in the highlands to carve rivers all over the island. In the past, Tasmania has exploited these raging rivers with hydroelectric power schemes that have created places like Lake Gordon. But massive conservation efforts in the late 20th century have put a halt to natural exploitation. Now, Tasmania's government and people no longer try to control the island. They let it run free, wild and natural.
Today, you can visit Tasmania's nature scars and then enjoy swaths of wild lands breathing free under the protection of conservation. The Natural State is a living museum and an example of what can happen when people come together to protect their corner of the world.

Tasmania began setting aside lands for conservation back in the late 1800’s before declaring the two first national parks in 1916 -- Freycinet National Park and Mount Field National Park. And that was just the beginning.
Today, nearly 45% of the Tasmanian island is under some form of natural protection. Of Tasmania's 92,610 square kilometres, more than 42,674 feature protections. These areas include the Tasmanian World Heritage Area, The Macquarie Islands World Heritage Area, 420 reserves, 19 national parks and crown land. And these numbers are just terrestrial; they don't even include the marine protected areas.
The Natural State features one of the most unique underwater ecosystems in the world. With the waters around Tasmania being isolated for nearly 35 million years, more than 80% of its underwater life is endemic. Kelp forests, giant sponges, the smallest penguins on earth, sea pens, sea dragons, seagrass and Right Whales all call Tassie waters home. And the government has stepped in to protect nearly 135,100 hectares of marine landscape. The Tasmanian island features nearly 5,400 kilometres of coastline and more than 7.9% of that coastline is protected in some form. Tasmania proudly boasts seven marine reserves and 14 different marine conservation areas. Image thanks to Tourism Tasmania & Michael Walters Photography.

You don't need numbers to understand Tasmania's commitment to preservation. Bring up a map of the island. You'll see the entire southwest corner is protected as Southwest National Park in Tasmania's World Heritage Area. There are no roads into the park. At the very southwestern tip of the park, there's a lonesome hiker's station named Maleacua with an air strip and small harbour. Those that want to experience this wild land must be dropped off by plane or boat and walk their way out over the course of a week on the world-famous South Coast Track. Image thanks to Tourism Australia & Graham Freeman
Directly north of Southwest National Park's 6,183 square kilometres is the Franklin-Gordon Wild Rivers National Park and its 4,463 square kilometres. Roads cut through the wild rivers and that's where you'll find the Gordon Dam, but you'll find few roads in Cradle Mountain-Lake St. Clair National Park bordering to the north. Consuming more than 1,614 square kilometres of Tasmania's highlands, Cradle Mountain-Lake St. Clair National Park is bordered by yet another national park that is even more wild and rugged. You'll find no roads and scant evidence of human existence in the Walls of Jerusalem National Park's 518 square kilometres. The only way in and out is on foot. Hike at your own risk.
These four national parks, all bordering and stacked on top of each other, consume more than 12,778 square kilometres of the state's 92,610 square kilometres. Visually, it looks to be one-third of the state, but you must account for Tasmania's 333 outlying islands.

It's easy to think that a government has set aside land for profit. After all, more than six million people visit America's Grand Canyon each year. Considering the entry fee, that's big business. But Tasmania isn't looking to profit off of its protection. It's simply protection for protection's sake.
The evidence lies in its no-road national parks. National parks without carparks, pay stations or accommodations. National parks so rugged and wild that you must sign a logbook to enter in case you don't reemerge. If reported lost, the government then sends a rescue party. These national parks are Southwest National Park, the highland's Walls of Jerusalem National Park and the Tarkine Wilderness's Savage River National Park.

Cleanest Air In the World

The Cape Grim Baseline Air Pollution Station sits right in the teeth of the Roaring Forties at the northwest edge of Tasmania. Sitting on a cliffside, this station collects some of the cleanest air on planet Earth. The wind patterns take air that has been circulating over the Southern Ocean without having hit a landmass since South America. In fact, if you drew a straight line west from the research station, your finger would clear the southern tip of Africa and wouldn't hit landfall until Argentina.
The research station has been keeping collections of air in barbeque gas-like canisters since the 70's and has the longest running collections of air on the planet. The air can be analyzed to understand the full effects of climate change by measuring certain chemicals.

Tasmania is abundant with unique wildlife from ferry penguins to wallabies to wombats. But there are two species that are in trouble and the Tasmanian government, as well as private enterprises, has stepped in to save them. The Tasmanian Devil, aggressively portrayed in cartoons, has been decimated by a unique form of face cancer. These little critters often nip at each other when feeding and mating which helps spread the cancer. The disease has affected more than 80% of the wild population and some scientists feared for the extinction of these endearing marsupials. Image thanks to Wai Nang Poon.
The government has increased its population of domesticated devils in response. Scientists are aiming to increase genetic diversity among the wild population to protect against the cancer. Using genetic mapping, conservationists are releasing stronger devils into the wild to combat the disease.
The Orange-bellied Parrot is only found in the southwestern tip of Southwestern National Park. With a wild population under 100, the Tasmanian Government and BirdLife Australia have spent more than $2 million to save the colourful creature. Conservationists boat or fly to the small hiker's outpost of Maleleacu to tame the number of predators while increasing the health of the bird's natural habitat. You can still catch a glimpse of these endangered birds at the lookout hide at Melaleuca. 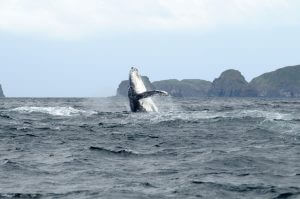 stations. Migratory Humpback and Right Whales were hunted to near extinction in the 1800's and early 1900's. And the exploitation of the seas went beyond the whales. Penguins, seals and sea lions were also affected deep in the Southern Ocean on the Macquarie Islands. Now the islands are under government protection while whale and dolphin populations are monitored. You can now catch glimpses of Southern Right Whales sailing through the Southern Ocean from the ruins of the whaling stations in Tasmania's south. It's a living marine museum.

The government has already issued longterm plans to further protect the island. The Natural Heritage Strategy for Tasmania can be downloaded from the government's website and it lays out plans until the year 2030. It contains strategies for farming and land use, how to combat climate change, increasing and strengthening biodiversity, innovations in marine conservation, protecting endemic and endangered species, strengthening relationships with the Aboriginal community and reviewing past legislation for environmental weaknesses.

Tourism has exploded in Tasmania as many are finding the Apple Isle enchanting. This not-so-secret-anymore destination is the perfect combination of mainland Australia and New Zealand wrapped up into one manageable-sized island. And many come to the Natural State for its rugged wilderness, clean air, fresh produce, farm-to-table lifestyle and unique wildlife. Conservation of Tasmania feeds the tourism economy while being good for Mother Earth.
Tasmania has openly declared its desire to be an example to the planet. With its responsible collection of fees and data, its conservation of wild lands and its growing tourism industry, the Natural State endeavours to be emulated the world over. You can spend your tourism dollars in Tasmania in good conscious. 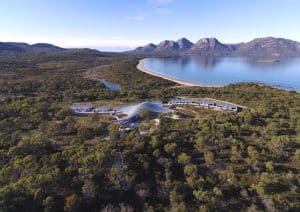 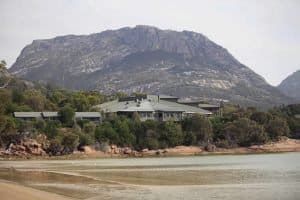 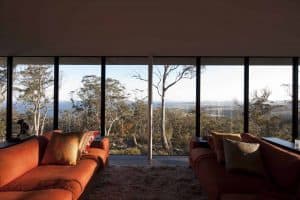 Ocean Retreat
Find A Rate
This family-friendly vacation home is located by the ocean.
View More
OUR PICK 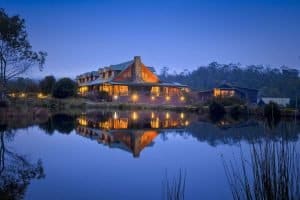 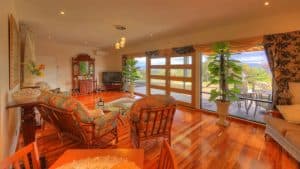 Strahan – Things to Do