Callington Mill - Built in 1837 and is the third oldest windmill in Australia.
Image thanks to: Tourism Tasmania

It's difficult not to get swept up in the beauty of the Georgian architecture of the town of Oatlands. More than 150 sandstone buildings stand in this tiny little town, but one stands taller than the rest. The picturesque Callington Mill demands attention for its white dome, classic four-blade propeller and cylindrical sandstone architecture. Architecture lovers flock from all over Australia to experience Oatlands' buildings and many of them will tell you they came here specifically for the Callington Mill. The Callington Mill is in the heart of the Oatlands on the shores of Lake Dulverton. This small town of the less than 1,000 citizens can be accessed via the Midland Highway in between Hobart and Launceston. It's a straight 84-kilometer shot north of Hobart which will take you a little over an hour. Launceston sits 116 kilometers to the north making the drive one hour and 33 minutes. Devonport, familiar to those who took the Spirit of Tasmania ferry from Melbourne, is nearly 200 kilometers away making the drive two hours and 20 minutes.

This Lincolnshire Tower Mill was built back in 1837 by a man named John Vincent. Renovations have restored this mill to full working order and it is now the only operating mill of its kind in the entire southern hemisphere. It is the third oldest windmill in the continent which makes it one of Tasmania's major tourist attractions. Visitors are allowed to climb the internal stairs for a view of the town and its beautiful natural surrounds. And it's quite a view. Oatlands is the largest intact Georgian streetscape in the country. Also on the grounds are a granary, stable, cottage and house.

The mill is proudly open to visitors but you'll have to book a tour. There are a variety of tours available in town that include a stop at the Callington Mill. If you're lucky, an outgoing miller is actually grinding wheat into flour during your visit. But, because cameras are considered a health hazard, you won't be able to snap any pics while inside the tower.

You'll ascend four different floors during your visit. The bottom floor is considered the Bagging Floor while the second story is named the Stone Floor. Number three is the Bin Floor and the top story is the Dust Floor. A helpful guide will teach you about each area of the mill and guide you through the entire process of creating flour. Be sure to watch your step. The stairs are incredibly narrow and could be considered ladders by some. The guides inside the tower are incredibly health conscious. You have to put on a hairnet as well as a protective helmet to protect the flour and your noggin. And with many steep and narrow staircases, this tour is not recommended for those who have difficulty on stairs.

The visitor center is in the very same complex as the mill itself. You'll also find a gift shop in the mill complex where you buy some locally ground flour. You'll also find a variety of artisan baked goods for your sweet tooth. The Mill keepers Café is open from 9 AM to 4:30 PM every day where you can order up some Devonshire Tea and delicious scones.

The Callington Mill has been featured on many Tasmanian TV series. Poh's Kitchen made a visit to the mill for their food series on ABC TV which created quite a stir in Oatlands. The Masterchef got clearance to tour the mill with cameras during the event. The mill was also featured on ABC television's Stateline program in 2010.

John Vincent, the builder of the Callington Mill, was a successful proprietor of two hotels on the Tasmanian island. His son, John Jubilee Vincent, served as the innkeeper at the Lake Frederick Inn which is now the Dulverton Inn. You can still visit this hotel in the town of Oatlands. Image credit: Tourism Tasmania & Steven French In 1836, at the age of 57, John Vincent arranged for the best technology of the day to create the mill. Despite his commitment to building the best mill possible, he later abandoned the idea by trying to rent the building in a local newspaper. His attempts to let the building failed and he eventually sold the mill to his innkeeper son, John Jubilee Vincent. John Jubilee operated the mill for 10 years before leaving Tasmania for the gold rush on the mainland in the early 1850s. He quickly sold the mill to Thomas Jillett in 1853 shortly after his departure.

Thomas Jillett also operated the mill for about 10 years until the early 1860s. He rented the mill to William Exton for a short period of time before selling the mill outright to John Bradshaw in 1863.

Recent renovations have brought the mill back up to operating order and it is now open to visitors every day of the year. Guided tours take place every hour between 10 AM and 3 PM on every hour. 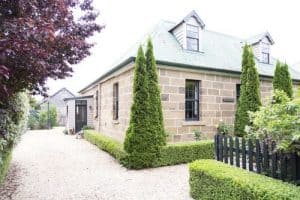